Still waiting (done now 1/2/2019!) for completion of our 480v 3 phase electrical installation, but it should be done very soon. Some troublesome pieces of brand new conduit were allowing water to run into the new circuit panels barring us from turning on the new power for the first time.

New columns to support our 2nd floor rebuilding are being worked on right now in a local metal-working shop, and should arrive here next week. (we have 8 of 9 as of 1/23/2019!) These were necessary to reinforce a 2nd floor that was never built for anything more than light storage, and when completed, will allow a 180 person seating limit in the 2nd floor space.

Concrete foundations were poured for the new columns about a month ago, after which column fabrication began.

Really hoping things get moving faster, because the first shipments of brewery equipment are scheduled to be shipped in the next few weeks. This includes Hot and Cold water tanks, a keg washer and keg filler, dual chillers, a 25hp compressor to run the canning/bottling line, and a bunch of LED lighting.

5/24/2019: Fermentation room concrete is poured, with radiant heat tubing installed within the concrete. Old stairwell has been removed, and lumber for new stairs has been delivered. Main floor rough-in plumbing should be completed this weekend, after which final concrete pour takes place. Experienced several week delay when plumber was about to hook up to main sewer drain, only to find the City had neglected to reconnect the building sewer when the streets were redone some years back. Arghh!

After a series of delays, including a 5 week environmental review by the State of Wisconsin due to our brewery being built in an historic building, we should be cleared to begin building the brewery in the next week or two. Could be this Friday, or as late as July 9th. In the meanwhile, we have cleared out tons of the stuff that was in the building so that it is ready for construction as soon as we receive clearance from HUD.

We have added some brews to our lineup, finalized on a 24 tap system, completed designwork on the brewery and taproom, achieved an easement to obtain the required electrical needs, and have obtained full financing for the project.

Our downtown neighbors, Littleport and DPW and are participating in an alley cleanup behind our building called “Imagine Alley” on June 30th to beautify and make better use of our surroundings for all businesses with alley frontage to create a unique feel. Our goal is to get the city to rebuild the brick alley which lies underneath the asphalt and create a mini-mall of sorts. If any of you have shopped the brick alleys in St. Augustine, FL and in other historic locales, you know how beautiful they can be.

We are really anxious to order our brewing equipment, and will do so as soon as HUD gives us clearance to proceed.

Early supporters are ordering their own beer glasses now, which entitles them to a free beer every week for 1 to 2 years at the Littleport Brewing Company! Go to the product list now to order your glass, custom order your glass type and colors. Save $50.00 per year by ordering early! 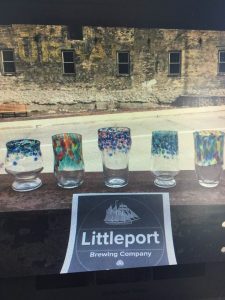 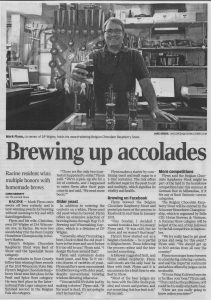 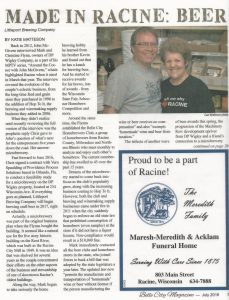 RACINE — For years the owners of DP Wigley, Mark and Chris Flynn, have wanted to open a brew pub or microbrewery in their historic riverfront Downtown building. Now they’re planning in earnest to make it happen.

The Flynns have signed a contract with Vern Spaulding of Orlando, Fla.-based Providence Process Solutions to design a craft brewery for what is now their warehouse at 214 Third St. Spaulding has designed numerous craft breweries including Titletown Brewing Co. of Green Bay, Barley John’s Brew Pub of New Richmond and O’Fallon Brewery of Maryland Heights, Mo.

Mark Flynn is a longtime and award-winning home brewer. The Flynns also run their store within a store at DP Wigley, 234 Wisconsin Ave., called Hop To It Brewing & Winemaking Supplies, which sells beer- and wine-making ingredients and supplies.

Mark explained that a craft brewery, or microbrewery, is not a brew pub; it is primarily a production facility, although it can have a tasting room. A tasting room is “like a bar but with limited hours,” he said.

The Flynns’ plan is to build a microbrewery that would sell beers by the keg to southeastern Wisconsin taverns. There are many bars in Racine and Kenosha, and Mark said, “Every one will be selling beer for us once we are making good beer.”

They will also bottle their beers for sale in the tasting room, he said.

Flynn sees himself taking the role of “co-master brewer” for their future craft brewery that they intend to name Littleport Brewing Co. He also said he has his brewing partner in mind but declined to identify him.

Mark said they plan to start with six or seven different beers but will also have “seasonals.” The beers will include a Welsh pale ale, an India pale ale, an amber and a couple of stouts.

Also, the Flynns plan to hold a quarterly or semiannual home-brewing contest and then brew the winner’s beer, Mark said.

Chris said they’re working on their business plan and financing with advisers from SCORE, formerly the Service Corps of Retired Executives, and the Wisconsin Women’s Business Initiative Corp.

“We’re 100 percent confident” in the project, she said.

Big ambitions
Kenosha native Spaulding is working with the Flynns to take them from the planning phase for a craft brewery through project management. He estimated that if all goes well, they could be selling beer by the end of this year or late August 2018 at the latest.

This is the old elevator mechanism which, since the 1800’s, has been on the second floor of the DP Wigley garage. The garage will become the Littleport Brewing Company in 2017. 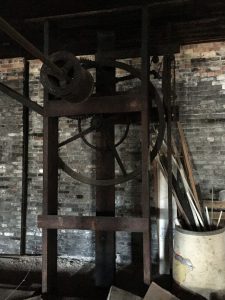 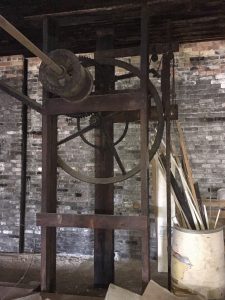 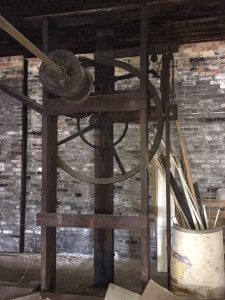