This is a pale lager made with Bohemian yeast, malts and hops, and not as sweet as the higher ABV version. This has been the best selling beer for our first year as a brewery. This is our light version, the heavier version coming in at 9.2% to 12.7% ABV, while this one is just 5.2% ABV. $5/pint 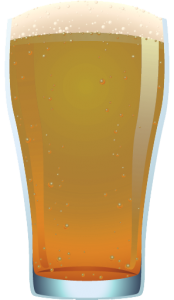 This was a family project, brewed with help of two brothers and named after our goddaughter! This is a relatively pale & smooth, yet strong (just like her) lager. Medium bodied with notes of honey (just like her), it has a slight toasted, malty aroma and low & spicy hop aroma. Crisp, clean, golden nectar! 211 kcal/12 oz. 6.4% ABV $6/pint

This is a very light & very quaffable brew. Just 3.5% ABV

In traditional brewing of Scottish ales these brews were mashed with one or at most two steps, usually at high temperature (often above 160F!) and sparged slowly and often fermented at relatively cold temperatures. Bitterness is low, resulting in a malty beer. The finished beer is aged only a few weeks, and the result is a malt focused, caramel flavored brew with a slight butterscotch after taste. 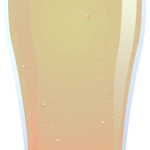 This Belgian Witbier is a nice light brew for those days when you just need a light refreshing brew. With Orange Peel, Lemon Peel, Lemon Grass and Coriander.

This is the 3rd in our family series of brews. Lolo’s Wit won a 1st place a few years ago and multiple breweries wanted to brew it. We did. This 400 year old beer style originated in Belgium. Spicy and citrusy flavors come from additions of bitter & sweet orange peel, lemon peel, coriander and a large dose of lemongrass. Crisp with a dry, tart, finish. 4.8% ABV 15 IBU $5/pint 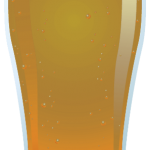 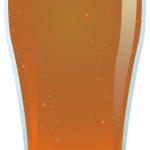 This Imperial IPA was made a bit differently than most brews. No hops were added until the last 30 minutes of the boil, thus avoiding some of the bitterness that comes from 60 minute hop additions. The result is brilliant hop aroma and flavor, without the accompanying bitterness that is often left on the tongue after drinking.

This beer is being brewed the last week of July. 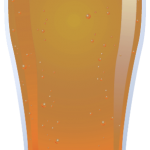 In the long view of the history of beer, American Pale Ale is a newcomer.  Based on English Pale Ale, American brewers adapted this style into something new.  Born out of the reverence English Pale Ales gained during the 1980’s American beer scene, APA is the bold, hoppier cousin of Pale Ale.  With an emphasis on American hops, APA is gaining popularity with breweries racing to make these ales with such great hop characters. Since tastes vary, so will the hop from time to time. This beer was brewed with Cashmere and Ahtanum hops.

Another of our family series, this is a pale ale bordering on being an IPA. We used Ahtanum and Cashmere hops for a light blend of lemon citrus and melon flavor, with a bit of floral nose. We then dry hopped with more Ahtanum hops to give it a bit more aroma. 5.0% ABV, 36.3 IBU, $5/pint 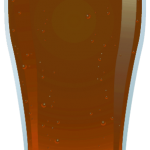 This beer was chosen by a close friend to become our version of another commercial brew. Whilst it fermented, that friend was accidentally shot in the stomach by a careless northern woodsman. Touch and go, the friend survived, and we named it after his tortuous ordeal. Happily, the location of the bullet was not in the body part the original beer was named for, nor did it have the effect the original beer described. Care to guess which beer the original was?

We now have on tap a lighter session version of this beer.

Deeply malty, with a bit of caramel flavor, some will detect a peaty, earthy and/or smoky aroma from the addition of peated malt. Also known as a “wee heavy.” Hops, which are not native to Scotland and were expensive to import, were kept to a minimum. This is 6.5% ABV. 37 IBU Calories: 310 kcal/pint 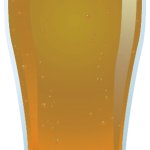 This Helles/Maibock is a pale, strong, malty lager beer. Slightly hoppier than your average bock, this one is too good to just serve the traditional springtime and the month of May. A pale version of a traditional bock, this is a Munich Helles brewed to bock strength. Dark and rich malt flavors but drier, hoppier, and more bitter than a traditional bock.

American and German Pilsner malts and Pale malt from the Netherlands combine with German and American hops and Munich Lager yeast to build this Racine style Imperial Helles Bock. Pale, strong, malty and hoppy- the hops in a Helles are a bit stronger than in most other bocks. 8.1% ABV 47 IBUs Calories: 237.3 kcal/12oz $6/pint 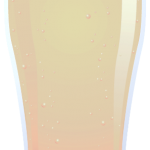 You can’t brew in a Cream City brick building without making a Cream Ale, right?

Here it is: a beer that is a full flavored, albeit less filling “lawnmower” ale that can be quaffed anytime. Pale malt, a little flaked corn and three different hops give this beer a fresh clean flavor when you just need to quench your thirst. To top it off, we made many different versions of this brew, including Pecan Cream, Campfire Cream, Casper Cream, Hazelnut, Pumpkin Spice, and many more…

Sold Out, but Coming Back Soon, the four most popular flavors! 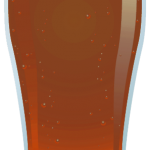 While most of our building was built with Cream City brick from Racine’s quarry located at what is now the Racine Zoo, the lean-to addition to the building was torn down in the 1890’s and rebuilt using Chicago Red style bricks. So here is the Red Ale to go with the Cream Ale representing our building’s past. This is a malty brew, initially sweet on the palate, it finishes with a pleasant dryness.

Maddy Mo Red Irish American Ale from Littleport #11 LOW Gluten! We took our standard Irish Red Ale recipe, and, due to the imported grain shortage, replaced all the German and Irish grains we normally used with American grains. The result is a slightly lighter, less malty version of our Irish red ale with a hint of coffee. We then used a product called Clarity Ferm which makes this a very low gluten beer, well below most individual’s gluten intolerance levels. Beers treated with Clarity Ferm test at 10 ppm of gluten, below the 20 ppm which is the FDA’s limit for gluten-free products. Tested and approved by Leslie, our gluten intolerance familial member. Calories: 143 kcal/12oz 4.4% ABV, 23 IBU $5.00/pint 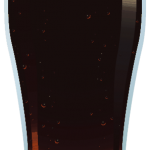 Chocolate Decadence in a glass…

This is a big, roasty, malty stout made with Belgian yeast, made bigger and darker with Belgian malts and Belgian dark candy sugar. This is the recipe used for our 1st place entry in the Door County beer festival a few years ago. Calories: 240.4 kcal/12oz 6.3% ABV, 41 IBU $6/pint

Sahti is a Finnish style beer. Sahti is a beer made with the fresh candles of Juniper and Pine branch needles. Finland is a tough place to obtain hops, so the branches were used to obtain the bitterness needed in the brew. We add just a bit of French hops to maintain stability in the brew. This is a light brew, but full of pine and juniper, so it makes a nice Christmasy brew, but the problem is that it is best drunk fresh…and the fresh candles are available in spring here in Wisconsin.

The brewer is 31% Finnish, and Wisconsin has a huge Finnish population up nort’, so we just had to make this Finnish standard beer. Not your regular brew, with few hops, the Finns used the fresh spruce and juniper candle branches available in spring. Saison Calais farmhouse yeast rounds out the flavor of this Finnish favorite, which is also a very low calorie brew. If you are Finnish, taste your Finnish heritage. You are probably going to really like it, or really dislike it, so try it in a sampler first. This is an original Finnish recipe from our Finnish foreign exchange student, Mikko. 5.1% ABV, 15.9 IBU 128.1 kcal/12 oz $3/snifter or $5/pint